The Harm Of Cyberbullying: Physical And Mental Effects

Bullying can have significant impacts on a victim's physical and mental wellbeing. Cyberbullying might be, in some cases, even more distressing for the victim since it is difficult to get away from it. For example, with the spread of online communication, if the bullying is connected to a school-related incident, the victim is unable to get away from the torment even at home.

Cyberbullying is easy for bullies because it can be done anonymously without facing the victim. Bullied or cyberbullied teens are more likely to suffer from sadness, depression, and suicidal thoughts.

It's critical to comprehend how severe bullying can be and how it might harm even a robust person. Firstly, it can damage a victim's self-esteem and trust in other people. In addition, the victim may find it challenging to build relationships as bullying leaves deep scars that affect later in life.

Self-esteem is every individual's unique way to evaluate and comprehend themselves. It develops throughout our lives through different experiences. Decreasing self-esteem is linked to appearance pressure, such as glorifying thinness and developing various eating disorders.

Researchers at Duke Medicine have provided indications of long-term biological consequences of bullying for the victim. For example, it can lead to chronic inflammation that lasts into adulthood. On the other hand, in some instances, bullying can promote the perpetrator's health and increase their social status.

Bullying is unpleasant and stressful for the victim. If the stress is long-term, it often leads to mental and physical health ailments. Mental symptoms may include anxiety, insomnia, unhappiness and irritability, while physical symptoms may include neck and shoulder pain, headache, abdominal symptoms, dizziness, high blood pressure and arrhythmia.

Anxiety as a mental symptom is fairly common amongst all of us. Anxiety and fear are feelings designed to protect individuals in situations of danger. However, when anxiety symptoms are continuous, severe, restricting and monopolising a person's mental and physical resources, we can speak of a mental illness.

Anxiety disorders that develop during adolescence increase the chance of developing depression in adulthood. It's also been shown to increase the incidence of substance abuse, particularly harmful drinking.

As a concept, depression has varying degrees of severity. Depressive symptoms can be mild, moderate, or severe, and they are known as depressive episodes. A central sign of depression is melancholy as the general desire for life and joy has diminished.

Depression is a serious condition that can recur and have a negative impact on a person's quality of life and ability to function.

Prolonged depression can lead to a number of difficulties for a young person. Depression and its symptoms affect social and cognitive skills, which usually influence school success and decline in grades. At its worst, depression symptoms might make life so difficult that students are unable to reach their study goals or even complete their courses or degrees. Therefore, depression not only affects a person's current life or circumstances but can impact their future life.

Bullying a kid over a lengthy period of time can cause later-onset depression as well as significant self-harm and suicidal thoughts. Self-harm is a sign of how someone is feeling rather than the actual problem, which is an indication of severe emotional distress. As a result, we might overlook the underlying cause of self-harm and instead concentrate on what children are doing to themselves.

A Word From Saasyan

If you or a person you know is being cyberbullied, it's essential to get help and end the abuse. Help in this instance can mean a number of things, such as reporting cyberbullying to a social media platform, letting the school officials know, or in some cases contacting the police. Of course, every situation is unique, but it's important to remember that there are many ways to get help.

Report Cyberbullying And Get The Help You Need

Quick Help For Kids  If you suffer from bullying, the most effective method to prevent and overcome bullying is to bring it up and report it. Reporting also shows bullies that their behaviour is not accepted nor tolerated.

Cyberbullying: What Is It And How Common Is It? Bullying has been a part of human civilisation since the dawn of time. There will always be victims of bullying and perpetrators, but it's never acceptable - including when it occurs online. 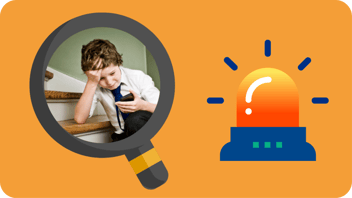 How Can You Know If Someone Is Being Cyberbullied? Preventing bullying at schools is challenging, as adults are not always informed about bullying and it also does not often leave physical marks. Especially when it comes to cyberbullying, adults are rarely present in online situations to take action. Knowing that no adult sees the content shared can incite bullies even more.